The revitalization of a city district is a long-lasting and complex process, in which a large number of relevant stakeholders will play their roles. The Špitálka project is divided into individual stages, which consist of partial steps necessary for its successful implementation.

The first step was the organisation of an international open one-phase urban design idea competition for the entire basic settlement area (the size of 24.55 hectares). For the future rebuilding of this district was necessary to get a high-quality urban design proposal that determines the appearance of the entire district in the future and will functionally integrate the entire quarter into the structure of the city. The competition was announced at the end of October 2018 and the deadline for submitting the competition bids was 21 January 2019. More information about the competition can be found here.

Based on the results of this competition and after further expert discussion between representatives of the city, landowners and representatives of the Office of the Architect of the City of Brno, a zoning study preparation was commissioned, which will serve as a basis for an amendment to the Master Zoning Plan of the City of Brno and the site regulation plan. Zoning study will be carried out from September 2019 to April 2020.

The first phase of the construction will focus on the area occupied by the district heating company Teplárny Brno, where the company’s Špitálka plant is located. Currently, optimization of this operation is being prepared and the western part of the compound will then remain disused. The city of Brno is therefore interested in using this site for the future construction of smart district RE:Špitálka and temporarily make this site accessible for further development activities of the city. It will be necessary to find a suitable business model for the future development work that will be economically reasonable for the city, the company Teplárny Brno and for potential future investors and developers as well.

Update (March 2020): An urban-architectural design – Master Plan for Špitálka, which will further define the future shape of the smart district, is currently underway. The master plan will be completed by the end of April 2020 and studio A8000 architects is responsible for that.

Concurrently with the planning study, an initial analysis of innovative projects and measures that can be used during the first phase of construction in the locality is already being conducted. More information on innovations can be found in the INNOVATIONS section.

What this smart neighbourhood should look like in the future is also determined by the new strategy of the city of Brno up to the year 2050. The strategy entitled #brno2050 sets out partial values of what the city should be like in the year 2050, what specific targets should be achieved and to what extent. The smart district at Špitálka will serve as a pilot neighbourhood for verifying the objectives set in a closer horizon than 2050, so that the individual measures implemented can be evaluated and potentially further expanded to other areas of the city.

More information about the strategy #brno2050 can be found here: www.brno2050.cz

The Špitálka district is directly linked to the historical centre of the city and at the same time it is part of the protection zone of the city’s heritage conservation area. It is an area with a high density of development and a closed block structure. There are former manufacturing factories, which previously formed the industrial centre of the city. Nowadays, these dilapidated buildings form a large part of local brownfield sites. The development of the whole area will be determined by the winning urban planning design proposal.

Construction of the smart district RE:Špitálka will be concentrated in the western part of the heating plant of the company Teplárny Brno. 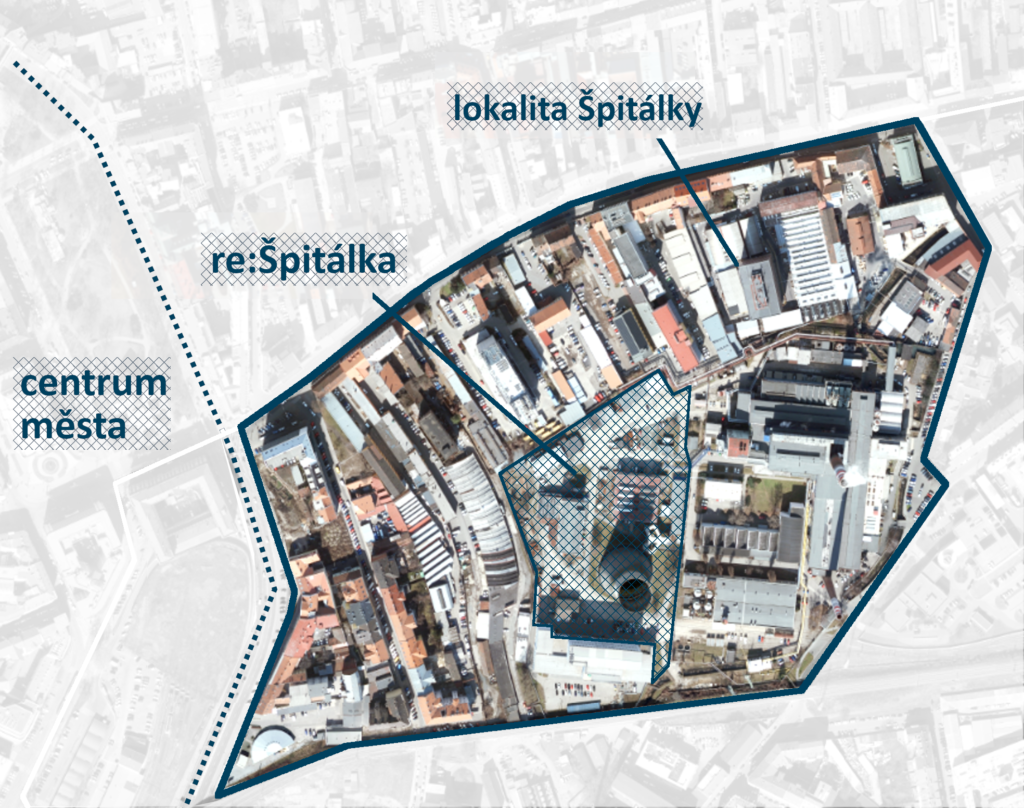 November 2018 to March 2019 – announcement of an International Open Urban Design Competition, competition deadline and evaluation of the competition bids – COMPLETED

September 2019 to April 2020 – commissioning and processing of a zoning study, which will be used for the adjustment to the Master Zoning Plan of the City of Brno – IN PROCESS

November 2019 to May 2020 – processing of urban-architectural design for narrower territory in the RE: Špitálka locality – IN PROCESS

2021 to 2022 – processing of construction documentation and permissions

after the year 2023 – the construction of a pilot smart district in the city of Brno.